What are the best places to find birds on Vashon-Maury Island? In his book The Birds of Vashon Island, long-time Vashon bird expert Ed Swan picked the top 10 below.

Before you go, download a map of natural areas to help you find them, and download a Vashon birds checklist to keep track of what you see.

1. Fern Cove
This delta formed by Shinglemill Creek is one of the best places to find shorebirds during the spring and autumn migration periods. During the summer, it’s not uncommon to see Bald Eagles, Ospreys, and Great Blue Herons battling one another for a fish. A wide variety of birds can be found on the walk through the woods from the road to the beach, and in the brushy area along the shoreline.

Fern Cove is on Cedarhurst Rd, on the northern end of the island. From Vashon Highway turn west onto 132nd Pl, which becomes Cedarhurst, and go about 1.3 miles. From Westside Hwy’s north end, where the road curves and becomes Cedarhurst, go about 1.8 miles. There is a small parking area on the south side of the road, in front of a gate. (This is also the entry to the Shinglemill Creek Preserve, which has several miles of trails along the creek and through the woods.)

2. Fisher Pond
This large pond hosts many of the duck species on Vashon. Pied-billed Grebes, Mallards, and Wood Ducks are there year-round. Green-Winged Teals, Northern Shovelers, Ring-necked Ducks, Hooded Mergansers and Buffleheads visit in the fall. A variety of birds inhabit the forest and thickets surrounding the pond. Many swallows, warblers, and other migrants arrive in spring. Look for Wilson’s Snipe in October.

Fisher Pond is on Bank Rd, about 1.2 miles west of Vashon Highway. From Westside Hwy, turn onto Thorson Rd and go 1.2 miles east.

3. Mukai Pond
You can almost always find interesting bird life at Mukai Pond and in the brushy, marshy habitat around it. Depending on the time of year, watch for Buffleheads, Hooded Mergansers, Cedar Waxwings, Common Yellowthroats, Wilson’s Warblers, Western Tanagers, Steller’s Jays, Swainson’s Thrushes as well as swallows, sparrows, flycatchers, and hawks overhead.

Mukai Pond is in Island Center Forest. To enter from the north, take 115th Ave south from Bank Rd and follow the dirt road to a parking area. The pond is a short walk east. To enter from the east, from Vashon Hwy turn west onto 188th St and follow to the end, turning right into a parking lot, and follow the trail signs to the pond. (This lot is close to another good birding spot, Meadowlake Pond, which has an observation deck where you might see Hooded Mergansers, Mallards, swallows, Cedar Waxwings, Red-breasted Sapsuckers, and Common Ravens.)

4. KVI Beach
Diverse habitats at KVI Beach attract a variety of birds. Semipalmated Plovers, Greater Yellowlegs, and sandpipers can be found along the sandy beach during migration; Sanderlings in summer. In fall through spring, loons and grebes can be seen in the waters offshore. Bald Eagles often perch on the KVI tower year-round. Green-winged Teal and Mallards are often present in the salt marsh and pond in the interior of the beach, while flycatchers, Nuthatches, Yellow Warblers, and Kinglets might be seen in the wooded bank above the beach, depending on the time of year.

To get there: From the intersection of Vashon Hwy and 204th St, go east to the shore, turn left onto Chautauqua Beach Rd and go north to the four-way stop, then turn right and park along the road at the bottom of the hill. 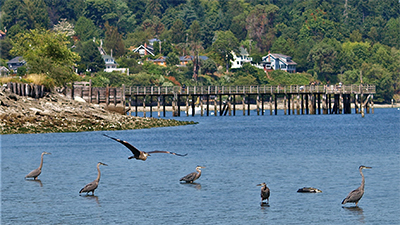 5. Ellisport and Tramp Harbor
Stop at Ellisport, then head south to the fishing pier and to the pull-out across from the old Portage store to watch for marine birds. Hundreds of American Wigeons, often with a Eurasian Wigeon mixed in, congregate near the shore at Ellisport in fall and winter. Watch too for goldeneyes, scoters, Buffleheads, grebes and loons. The old pilings host Double-crested Cormorants, Great Blue Herons, and Glaucous-winged Gulls in winter, and Purple Martins use the nest boxes in summer.

From the fishing pier and Portage store area you’re likely to see Horned and Red-necked Grebes, Greater Scaup, Barrow’s and Common Goldeneyes, Hooded and Red-breasted Mergansers, Buffleheads, and White-winged and Surf Scoters from November through March. Common, Pacific and Red-throated Loons and Western Grebes might be seen farther out; a scope is helpful.

To reach Ellisport from the four-way intersection of Vashon Hwy and SW 204th St, go east on 204th/SW Ellisport Rd to the bottom of the road, then turn north onto Chautauqua Beach Rd SW and find the dirt parking area to the right. To get to the fishing pier, head south along the water (Dockton Rd SW) for about a quarter mile, and park along the road. Continue another quarter-mile south to find the pull-off and viewing spot across from the closed Portage store (intersection of Portage Way SW and Dockton Rd SW).

6. Burton-Shawnee stretch of outer Quartermaster Harbor
This stretch of the Vashon Highway has a number of pullouts that offer views of outer Quartermaster Harbor. Among the 35 marine species seen regularly (in season) are Red-necked and Horned Grebes, loons, cormorants, ducks, shorebirds and gulls. Western Grebes, once abundant, have declined drastically in number. At Shawnee Rd, a stream delta attracts gulls, and the uncommon Black Scoter might be seen in nearly waters in fall through spring. In winter, Sanderling often rest on the small square docks as do all three cormorant species. Bald Eagles often fly overhead or watch from tall treetops.

Drive along the Vashon Highway south of Burton. 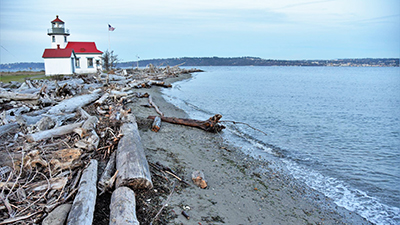 7. Point Robinson
Because it juts out into Puget Sound and has a mix of shoreline, woodland and thicket habitats, Point Robinson attracts a wide array of birds. A number of rarities have been spotted here over the years.

The greatest diversity of species occur here from September through mid-May. The earliest migrant warblers, vireos, and thrushes are often seen in the bluffs above and to the south of the lighthouse.

To get there: From the intersection of SW Quartermaster Dr and Dockton Rd SW, where Vashon and Maury islands connect, head south on Dockton Road SW, east on SW 240th Street, south on 59th Avenue SW, and east on SW 244th Street. There is a parking lot and trail access on SW 244th Street. You can also park along SW 248th St near the viewpoint and the head of a trail that winds down to the beach.

9. Raab’s Lagoon
When you arrive at the parking area at the entrance to the lagoon, watch for the many passerines that can be found in the surrounding trees and brush throughout the year, including Lincoln’s, Song, Fox, White-crowned, and Golden-crowned sparrows. As you walk toward the water, Bewick’s wrens might be found in the meadow of native plants.

Raab’s Lagoon hosts Greater Yellowlegs in winter, and Great Blue Herons and Bald Eagles are often seen year-round. Scoters and goldeneyes forage in Quartermaster Harbor near the mouth of the lagoon in fall through spring, and Caspian Terns can be seen in summer.

To get there: From the intersection of Quartermaster Harbor Drive and Dockton Rd, go 0.3 miles south and take Kingsbury Rd to its end. 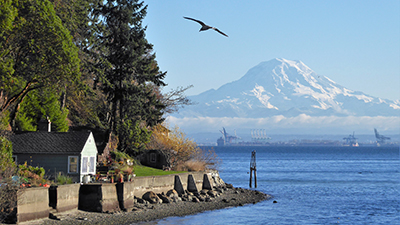 10. Tahlequah ferry dock and the ferry route
Watch from the shore with a scope or take a ferry ride for close-up views of many harder-to-see species in this passage.

In fall, Parasitic Jaegers chase the Bonaparte’s Gulls and Common Terns and often cruise by at eye-level from the ferry’s upper deck.

Red-necked Phalarope show up in their fall migration each year as well. Rhinoceros Auklets and Common Murre are common in winter and with luck, a Marbled Murrelet might be seen.

The Tahlequah Ferry Dock is at the south tip of the island, at the end of Vashon Hwy SW.

Judd Creek Preserve – Woodlands, meadows, and streams attract many birds including Pileated Woodpeckers, Bewick’s Wrens, and Cedar Waxwings year-round; Wilson’s Warblers, Orange-crowned Warblers, and Western Tanagers in spring/summer. The mouth of Judd Creek attracts many ducks. Access the trail from the east side of 111th St SW between SW 204th and SW 220th.

Sunrise Ridge (Off Vashon Hwy, 0.3 miles south of intersection with SW 204th). Raptors soar over this open area. Poplar trees along entrance drive host Townsend’s and Yellow-rumped Warblers during spring and fall migration. The blackberry hedge on the southwestern side is a good place to look for crowned and Fox Sparrows in fall and winter.

Manzanita – In late fall and winter, Pacific Loons might be seen in the channel between Manzanita and the opposite shore of Vashon Island. Manzanita is 6.6 miles from the intersection of Dockton Rd and Quartermaster Drive. Follow Dockton Rd to the village of Dockton and turn left on 99th Ave SW. The arterial turns right, becoming SW 280th St, then left, becoming 101st Ave SW. Go downhill, turn right on Manzanita Beach Rd SW and continue to one of the pull-offs at the end of the public road. Walk to the beach to view the harbor entrance.

Lisabeula – This small park at the west end of 220th St is a good picnic spot and offers views of Colvos Passage, on the west side of Vashon. Watch for Common Murre, Rhinoceros Auklet, grebes, mergansers, and goldeneye on the water, and for Robins, Cedar Waxwings, chickadees, wrens, kinglets and sparrows in the trees, brush and roadside.